Exactly one week ago today my first published work , Susanna's Heart, was released it's currently #1 seller at http://redrosepublishing.com/bookstore/.

I know I'm beginning to sound like a broken record, but this comes from my heart. 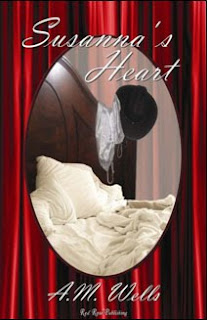 Susanna Moore thought she'd found the man of her dreams. That is until she caught him in bed with her sister.

Rancher Noah Weber vowed to never involve his heart again when it came to women. However after a chance encounter with Susanna, dormant desires are reignited leading to full blown passion.

Does time really heal all wounds? Can lust lead to love? Will these two lovers find their happily ever after? 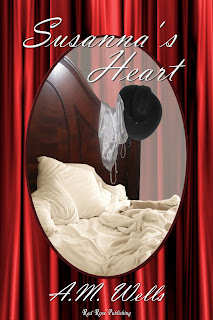 By the time he got back to the master bedroom, the bed was empty. Susanna’s discarded clothes lay on the floor…like bread crumbs. He followed them into the master bath. There he found her immersed in the claw-foot tub. Her eyes were closed and her head rested on a thick towel. He followed the long, smooth column of her throat to bare shoulders floating above bubbles.

Good manners dictated he leave now, as graciously as possible. However, he couldn’t seem to get his feet to move or his eyes to stop staring. She looked so enticing. The rapid pounding of his heart roared in his ears. What the hell am I doing here?

*
“Stop staring, Noah, it’s impolite.” Susanna inclined her head. My, my, he is one tall drink of water. Her eyes now drank in every inch of him, from head to booted feet. In a husky voice she didn’t recognize as her own, she said, “You felt it, too?”

She moved to the edge of the tub. “I could think of lots of reasons why this is a bad idea, but not now…later, maybe. I want you, Noah, right here, right now.” For too long, hate had fueled her emotions, leaving her bitter and angry. In Noah’s arms, the desire to feel a man’s touch was reborn. If only for this moment, she wanted to know this man in the most intimate of ways.

Her lips tilted up sensuously as she held out her hand, beckoning him. “There’s plenty of room. Join me.”
Posted by A.M. Wells at 5:59:00 AM 4 comments:

Look at Me...I'm in the Spotlight

Dyanne Davis graciously ask me if I would like to be feature on her Author's Spotlight for the the month of May, http://www.dyannedavis.com/AuthorSpotlight.html.

Go on over and take a read,