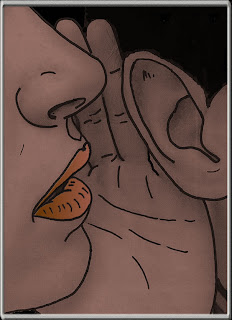 So, I started this new story and it’s coming along. It's flowing. My fingers are flying across the keys. All of a sudden the heroine starts talking to me about taking the story in a new direction. Okay, so she starts talking and I’m typing. The story is still flowing. Then whoa, hold up. She just said the “S.E.X.” word. And to be honest I’m just not ready to go there with her and the hero.
I mean I wanted them to really get to know each other first before doing the deed. Maybe around chapter 23 or after the wedding, but no, she wants it and she wants it now. I gotta tell ya, it totally killed the flow.
Rather than argue the point, I hit the save key, closed the program and put my computer to sleep for the night. Now I’m in my jammies, I’ve said my prayers and now it’s off to dream land. Or so I thought. You guessed it. She’s there in my head. Heck, I swear I can see her sitting on the foot of my bed talking a mile a minute.
It’s obvious my heroine is not going to let me get any sleep until we have it out. And just in case you were wondering, here’s how it went down.
Me: I just don’t think you should sleep with a guy you’ve only known for two days.
Heroine: Why not? If you would go back and write it, you would know that we’ve actually spent the last two and a half days getting to know each other.
Heroine: Oh, stop being such a prude already. He and I are not just jumping into bed with each other. We’ve talked, laughed, danced, and shared with each other. He’s going back to his family and responsibilities. I just want to spend one night with him, make a memory. Hey, I’m not looking for happily ever after.
Me: Ah, I don’t know, you are going to see each other again, can’t you wait until then.
Heroine: Look, I don’t know what's going to happen next, I only know what I’m feeling right now and I want to be with him. So, quit belly aching and write what I’m telling you.
Long story short I’m up at 3am writing the scene just as the heroine is telling it to me.
Bottom line: when a character speaks, listen up or you’ll never get any sleep.
I tell ya, this chick is a trip.
Heroine: I heard that.
A.M. Wells
Posted by A.M. Wells at 4:19:00 PM

Isn't it amazing how our characters can have minds of their own?

You did explain to sistergirl that her decision is going to change the relationship, right?

Can't wait to read how it turned out...